Piping pslist or tslist to findstr

If you are are a console junkie and you frequently play around or look around what is running in your system you may find that using TaskManager can be time consuming and limiting. So I looked around and found a way to use pslist (from Windows Sysinternals) or tslist ( a built in command line ).

The command below means to show information about a process running on "remote_machine" with process name of python.exe

This one is using the built in tslist command. Same as before, we want to query for a process named python.exe on "remote_machine."

~ts
Posted by Techno Scavenger at 2:10 AM No comments:

I have the following code to enumerate running instance of IE 7(not sure if this works with IE6).

For the above code to work, need to make a reference to shdocvw.dll, see below for the location: 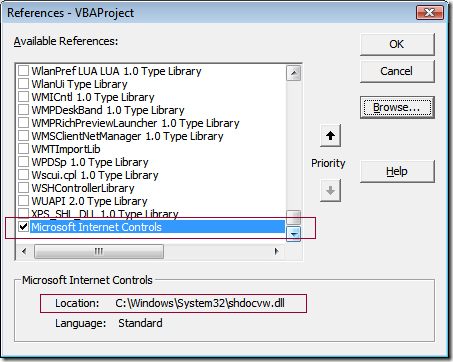 When I moved this code in Vista SP1 Business it stopped working. Who would think that this is related to UAC :)... anyway just disable UAC and this code should work again. Note that on one of my machines it is working with UAC on :(....

See this post to disable UAC. This is only one of the methods to disable User Account Control.
~ts
Posted by Techno Scavenger at 5:19 AM 2 comments: 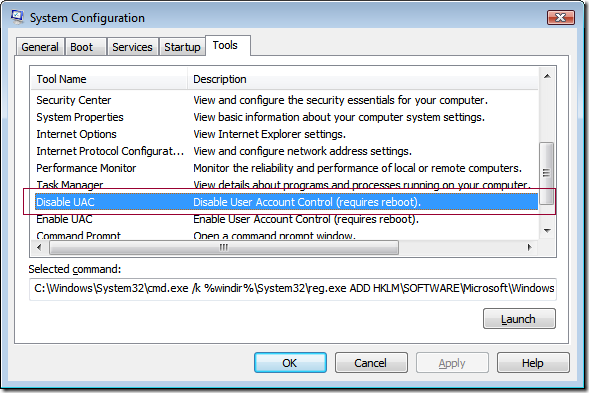 Then select "Disable UAC", see above for the location. Then hit on "Launch" button. Reboot computer.

Posted by Techno Scavenger at 5:11 AM No comments:

After installing/uninstalling software in Windows Vista Business machine "Remote Registry" got missing in the services list. Poking around the registry, noticed that under "HKEY_LOCAL_MACHINE\SYSTEM\CurrentControlSet\Services\RemoteRegistry", Start key was gone.

See picture below for the location: 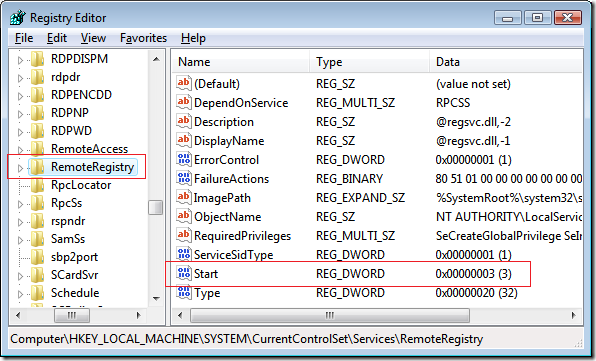 Creating the "Start" key of type REG_DWORD and value 3 (Manual) or 2 (Automatic), then a rebooted fixed the problem.

Posted by Techno Scavenger at 9:09 AM No comments:

Seems like location of simpleui.rc was changed in Eee900 PC. In my machine it is now located in:

Vitrite is a tiny utility written by me, Ryan VanMiddlesworth, that allows you to manually adjust the level of transparency for almost any visible window. It works by utilizing a feature present in Windows 2000/XP (and all later incarnations) for variable window transparency.

WinSpy++ is a handy programmer's utility which can be used to select and view the properties of any window in the system. WinSpy is based around the Spy++ utility that ships with Microsoft Visual Studio.

I have VMWare Server 2.0 Beta x running on Windows Server 2008 Std 64bit. At only 2GB I can only run one virtual machine. So the machine was upgraded to 8GB! I didn't notice much performance improvement in the host machine but I can start kicking in four virtual machines. But.........

The big but.. was that Windows Server 2008 just crashes randomly. Sometimes just a few minutes.. booom it crashes. Digging a little further I was able to simulate the crash pretty easily. Remote the machine's console session (/admin switch in mstsc.exe) then login back to the host machine.

So I was thinking/asking myself, was it because of the new 8GB memory upgrade? It must be, but is it the hardware or software that does not like the upgrade.

Trying to eliminate variables, I booted the machine into System Rescue CD then run memtest for two hours. No dice here. So it must not be the new memory being faulty.

Digging more, I found out that there was a video error logged in Control Panel>"Problem Reports and Solutions".

So I was thinking then that this must have been a video controller problem or video driver issue. Back in XP days, as far as I know, the high memory area of RAM is being used to access to PC peripherals like PCI cards, shadow of video memory etc. So maybe, just maybe, the drivers where not designed for this large memory configuration. The drivers might have used 32bit addressing assuming that it will be only upto 4GB in memory but I got 8GB in the system. So all of the sudden the memory being allocated (assuming the drivers are using malloc) now returns incorrect values explaining the random crash.

Since the machine is going to be a virtual machine host, I don't need fancy graphics effects, in fact the machine can be headless. So I downgraded the video driver to MS Windows SVGA default driver. Low and behold it is now at last working without issues.
Posted by Techno Scavenger at 4:04 AM No comments: